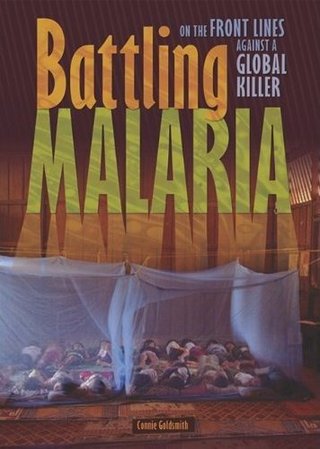 Battling Malaria: on the Front Lines Against a Global Killer

The Society of School Librarians International named "Battling Malaria" as best science book for grades 7 to 12 for 2011.

What the reviewers are saying:

"Battling Malaria is a fantastic overview of one of the world's deadliest killers! From the trained scientist who simply wants a review of this global disease to the high school student who is just beginning to understand the life-cycle complexities of a single-celled parasitic organism, readers will appreciate this very nice overview of the challenges that malaria poses for mankind." --Science Books & Films

"The book could easily be used as supplemental material for units on microbiology, parasitism, or biomedical advances. Its depth of content makes it suitable for reading, research, and as a source of material for debates. Additional resources included in the book are a malaria timeline and sources of information for students." -- National Science Teachers Association

“I became engrossed in this book as soon as I picked it up. I found the chapter describing the history of the disease, "Malaria Through the Ages," particularly fascinating. Tracing the record of the disease from ancient Egypt through the observations of George Washington and an apparent outbreak described in Little House on the Prairie, the author covers both medical and public health aspects.” (National Science Teachers Association)

I dedicated this book to the Bill and Melinda Gates Foundation for its extraordinary generosity in the fight against malaria, and to the thousands of doctors, nurses, and other healthcare workers who give their time and experience to fight malaria and other diseases of poverty around the world.

U.S. physician Terrence Smith has worked in medical clinics in Thailand and Myanmar (also called Burma) in Southeast Asia. He describes a scene that is typical in these and many other nations around the world. "Mothers carry their children through the forest to the clinic in their arms or wrapped in a shawl on their backs," Smith says. "The children have malaria, and they are too weak to cry, too weak even to swat the flies away from their faces. The children don’t complain when they are in pain. The mothers are stoic and don’t complain either, even when they fear their children will die. Malaria is so common that it goes untreated.... Mothers usually don’t bring their children into the clinic until the child is very sick and suffering the complications of severe malaria, such as seizures or unconsciousness."

If the World Health Organization (WHO; an agency of the United Nations) had a most wanted list of dreaded diseases, malaria would make the top three, along with HIV/AIDS and tuberculosis. Malaria sickens between three hundred million and five hundred million people around the world each year. That’s more than the combined population of the United States and Canada.

Not only does malaria make a lot of people sick, it’s a major global killer. More than one million people die from malaria each year. In Africa one child dies of malaria every thirty seconds. On the day you read this chapter, malaria will kill three thousand people. Most of them will be young children.

Malaria is caused by a tiny parasite. A parasite is an organism that lives in or on another organism known as the host. As they feed and reproduce, parasites often make their hosts sick. The malaria parasite spends part of its life cycle in humans and part in mosquitoes. The parasite needs both humans and mosquitoes to survive. People do not usually catch malaria from one another. In most cases, malaria passes from person to person by the bite of infected mosquitoes.

Malaria has been sickening and killing people for thousands of years. In the mid-twentieth century, The WHO and other groups made great strides in wiping out the disease. They conquered malaria in some places and sharply curbed it in others.

The victory was short-lived, however. In the late twentieth century, malaria stormed back in much of the world. Not only has malaria returned to some areas, it is also spreading to new areas. The disease has become more dangerous as well. It sickens more people than ever before and makes people sicker than in the past.

About half the world’s people live in malaria-stricken countries. Many of these countries are among the poorest in the world. Countries cannot thrive when their citizens live with constant illness and poverty. Around the world, scientists, health workers, governments, and private organizations are working to prevent malaria, lessen its spread, and better treat people who get the disease. If we can control malaria, millions of people around the world will enjoy healthier lives.

Dogs at War: Military Canine Heroes
Read interviews about how dogs are selected and trained. Learn how military working dogs find explosives and enemy soldiers in war zones. And read first-hand accounts from soldiers who have adopted their dogs.

Understanding Suicide: a National Epidemic
Suicide is among the top three causes of death for young people ages 15 to 24. In fact, it is a global epidemic, claiming 41,000 lives per year in the United States alone. Suicide touches people of all ages—from those who consider and attempt suicide to those who lose a loved one to suicide. Yet silence often surrounds these deaths and makes the suicide phenomenon difficult to understand. What drives people to take their lives? How can suicides be prevented?
Bombs over Bikini: the world's first nuclear disaster
Bombs over Bikini named a Junior Library Guild Selection for 2014; winner of the SCBWI Crystal Kite Award for California/Hawaii; recommended by the National Science Teachers Association; rated as outstanding by the Association of Children's Librarians of Northern California; a Bank Street College Best Book. Learn how the U.S. nuclear testing program in the Marshall Islands after WWII changed the lives of the islanders forever.
Battling Malaria: On the Front Lines Against a Global Killer
Malaria kills a child every 30 seconds. Learn about this deadly disease caused by parasites.
Superbugs Strike Back: When Antibiotics Fail
Many bacterial infections are becoming increasingly resistant to the antibiotics that once readily cured them.
Loading…}